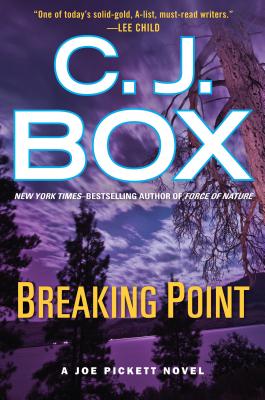 This is book number 13 in the Joe Pickett Novel series.

The thrilling new Joe Pickett novel from the "New York Times" bestselling author.
Critics called "Force of Nature "an amazing (Associated Press), outstanding (Minneapolis "Star Tribune"), warp speed . . . showdown between good and evil ("The Denver Post"). This is the best Box I ve ever read, and I ve read them all ("Library Journal").
"Breaking Point," however, takes Joe Pickett into uncharted territory. The question is: What will he do when he gets there?
It was always good to see Butch Roberson, Joe thought a hardworking, upright local business owner whose daughter was friends with his own. Little did he know that when he talked to Butch that day in the forest, the man was about to disappear. He was heading into the mountains to scout elk, he said, but instead he was running. Two EPA employees had just been murdered, and all signs pointed to him as the killer.
As the manhunt organized itself, Joe heard more of the story about the tract of land Butch and his wife had bought to build their retirement home on, until the EPA declared it a wetland. About the penalties they charged him when he balked, new ones piling up every day, until the family was torn apart... and finally, it seems, the man just cracked.
It was an awful story. But was it the whole story? The more Joe looks into it, the more he begins to wonder and the more he finds himself in the middle of a war he never expected and never wanted. Powerful forces want Roberson not just caught but dead and the same goes for anyone who stands in their way.
Every man reaches his breaking point. Joe Pickett may just have reached his.

C. J. Box is the author of thirteen Joe Pickett novels and three stand-alones, and has won the Edgar, Anthony, Macavity, Gumshoe, and Barry Awards, as well as the French Prix Calibre .38. His most recent Joe Pickett novel, "Force of Nature," debuted at #3 on the New York Times bestseller list. He lives outside Cheyenne, Wyoming, with his family.

“Like the forest fire described in the book, fans of this series will burn through the pages to discover who-dun-it and why.  With each book, Joe Pickett has evolved as a complex, deep character, richly described by Box.  Another must-read.”—Library Journal (starred review)

"Box doles out the complications and misfortunes with masterly control . . . One of [Box's] most exciting [novels]."—Kirkus

“Thrilling . . . [You’ll] have a hard time putting this one down and turning off the light.”—Booklist

“The tension starts early and never stops . . . [Breaking Point is] the best installment yet in an already rich series.”—Cleveland Plain Dealer

“Box's high standards have never been more evident than in the 13th novel in his series about Wyoming game warden Joe Pickett. "Breaking Point" skillfully shows how government can enhance lives and preserve the environment while also portraying the legal system run amok. But "Breaking Point" is no treatise pitting an individual vs. the big bad Goliath of government. The tense plot of "Breaking Point" provides edge-of-the-seat suspense filled with unpredictable twists and realistic characters worth caring about set against the vivid wide open spaces of Wyoming.”—South Florida Sun-Sentinel