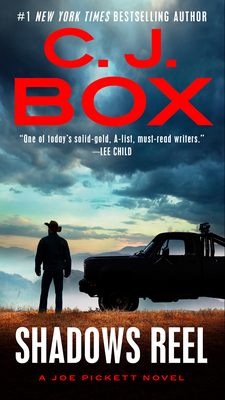 This is book number 22 in the A Joe Pickett Novel series.

Wyoming Game Warden Joe Pickett’s job has many times put his wife and daughters in harm’s way. Now the tables turn as his wife discovers something that puts the Pickett family in a killer’s crosshairs in this thrilling new novel in the bestselling series.

A day before the three Pickett girls come home for Thanksgiving, Marybeth Pickett finds an unmarked package at the front door of the library where she works. When she opens the package she finds a photo album that belonged to an infamous Nazi official. Who left it there? And why did they leave it with her?

She learns that during World War II several Wyoming soldiers were in the group that fought to Hitler’s Eagles Nest retreat in the Alps—and one of them took Hitler’s personal photo album. Did another take this one and keep it all these years? When she finds the name of a deceased local man who was likely in the unit, Joe visits the man’s son—only to find him brutally tortured and murdered. Someone is after the photo album—but why? And when a close neighbor is murdered, Joe and Marybeth face a new question: How will they figure out the book’s mystery before someone hurts them…or their girls?

Meanwhile, Nate Romanowski is on the hunt for a younger and more ruthless version of himself—the man who stole Nate’s falcons and attacked his wife. Using a network of fellow falconers, Nate tracks the man from one city to another, learning that his target is an agitator and a financier of anarchists. Even as he grasps the true threat his quarry presents, Nate swoops in for the kill—and a stunning final showdown.

C. J. Box is the author of twenty-two Joe Pickett novels, eight stand-alone novels, and a story collection. He has won the Edgar, Anthony, Macavity, Gumshoe, two Barry awards, the French Prix Calibre .38, the Western Heritage Award for Literature, and two Spur Awards. An avid outdoorsman, Box has hunted, fished, hiked, ridden, and skied throughout Wyoming and the Mountain West. He is an executive producer of ABC TV’s Big Sky and Joe Pickett on Spectrum Originals and Paramount+, both of which are based on his novels.

"Box is among the finest and most literate authors of modern thrillers. His western lore is authentic, his characters are memorable, and his plots keep you turning pages way past your sleepless bedtime."
—Bookreporter

"Nothing is easy to guess but the complex answers are satisfying in Shadows Reel, this spell-binding new addition to the Joe Pickett series."
—Reviewing the Evidence

"Box’s tempo and plot development are amongst the best I’ve ever read."
—Criminal Element